How to extend an LVM partition

In my previous post, I explained how to reduce an LVM partition.

In this post, I will explain the steps to extend an LVM partition.

From that PV, I created a VG named VG_DAS_1. From that VG,I created an LVM partitions. In our case, "/dev/mapper/VG_DAS_1-opt_oracle"  is the LVM partition which is of 10 GB. 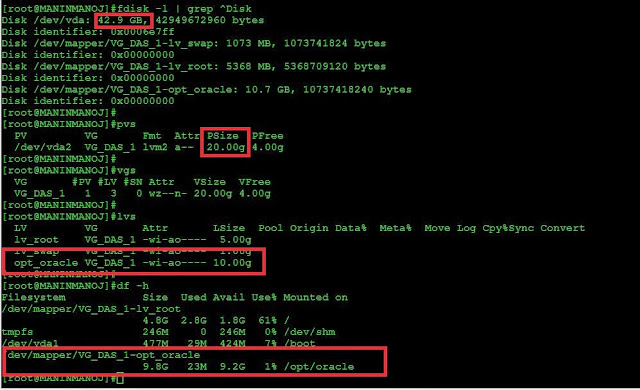 STEP 1:  Create a new partition "/dev/vda3" as shown in below snapshot. 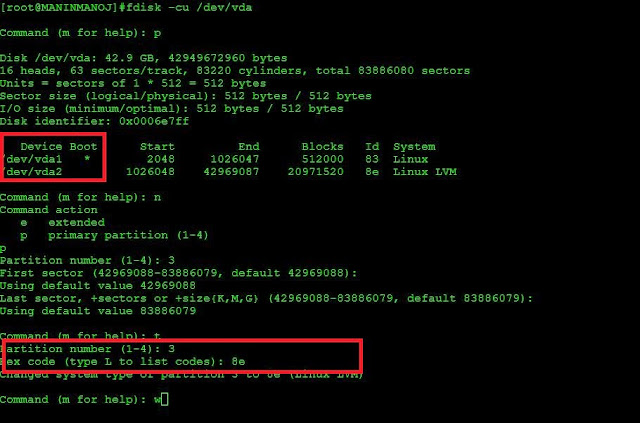 Now, in "fdisk -l" result you will be able to see the third partition "/dev/vda3" as below:

STEP 2:   Create a new PV using pvcreate command as below:

Now, if you run "pvscan"  you will be able to see the output as below, with details of PVs.

Now, the logical volume "/dev/mapper/VG_DAS_1-opt_oracle" has got 10 GB. The below snapshot shows the current status.

A logical volume can be extended using the lvextend command. You can specify either the amount by which you want to increase the size of the volume:

or the final size that you want to achieve:

The snapshot below shows the result:

STEP 5:  Now, extend the filesystem using resize2fs as below:

Finally, if you run "lvs" command you will be able to see the size of LVM "opt_oracle" has increased by 5GB as a result the available size is 15 GB.

So, we have achieved our final result.

Email ThisBlogThis!Share to TwitterShare to FacebookShare to Pinterest
Labels: APACHE